The Bank of Canada (BOC) increased their overnight rate by 1.00%, bringing it to 2.50% on July 13th, taking the Prime rate for most lenders to 4.70%. This is the fourth increase in 2022. The increase was higher than expected as most economists had forecasted an increase of 0.75%, making this one of the highest increases since 1998. 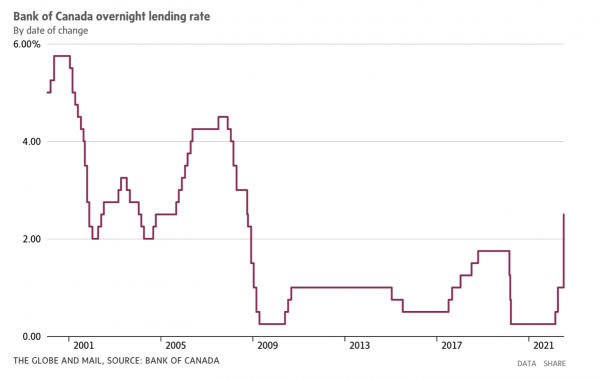 The BOC went with a “front-load” rate increase strategy to push borrowing costs higher now rather than in increments later in the year. Essentially the BOC is playing catch-up to try and get inflation back down as quickly as possible. The fear is that inflation could stick around longer and become “entrenched,” which would mean the economic cost of restoring stability would be higher.

BOC expects inflation to remain around 8% for the next several months with a drop to 3% by the end of 2023 and ultimately hit their target of 2% by 2024.

Some of the biggest drivers of current inflationary pressures include the war in Ukraine, oil prices and the ongoing supply disruptions resulting from COVID. Domestic price pressures from excess demand have also had an impact. To add to that, labour markets are at record low unemployment levels of 4.90% (with many people aged 55+ leaving the workforce), and there are labour shortages and growing wage pressures. With domestic demand remaining strong, businesses are passing the higher costs back to consumers.

What this means for consumers

The overnight rate increase will impact loans linked to prime, which for the most part, will increase to 4.70% (up from 3.70%). Typically variable rate mortgages, HELOCs (home equity lines of credit) and lines of credit will all be impacted by an increase in Prime. 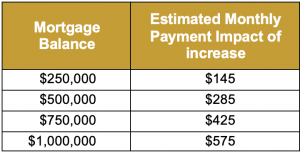 You won’t see an impact or change in your regular payments if you have a fixed mortgage rate.

Be mindful of the trigger payment. This is for borrowers with a variable rate mortgage with a lender where monthly payments don’t increase when Prime goes up (compared to an adjustable rate mortgage where your payments will move with Prime increases). Many borrowers went into a variable rate mortgage to get the lower rate option but stable payment of a fixed mortgage. Trigger payments have been often ignored as we haven’t seen such significant rate increases since the late 1970s. The trigger payment is the level at which your regular mortgage payment no longer covers the interest portion of your payment and would require you to increase your regular payments to align with current rate fluctuations. Sometimes, a lump sum payment could be required to bring your amortization in line with the maximum. For some who have become accustomed to the regular payment, this could be a significant jump with all the increases we’ve seen this year. Check with your lender on the exact trigger rate.

Looking back at historical data

Interestingly, all these hiking cycles averaged 13 months in duration. We’re currently four months into the current cycle. These six periods began a decline cycle on average 5.7 months after the last rate hike. Also, the average interest rate hike was 1.95% and the average decline was 2.85%. 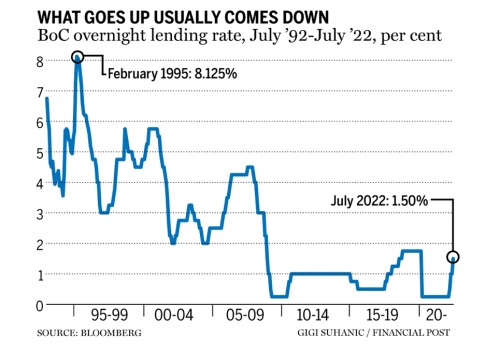 If historical data were any indication, we’d see another 0.70% increase before a possible decline cycle beginning at the end of 2023.

Now, of course, these are all historical figures, and they can’t always predict the future, but more importantly, it’s worth noting that the current surge in pricing is not permanent and will ultimately come to an end.

What we have been suggesting to clients

It is very important to remember that the current rate environment is not long-term or permanent and ultimately a coordinated effort by the BOC to ensure that inflation is under control. These rate increases will ultimately cease and we’ll then start to see some rate declines. We don’t expect rates to drop to COVID levels but certainly much lower than what we’re currently seeing.

It is always a good idea to complete a review of your current lending to ensure you have the most appropriate solution in place now and to meet your future needs.

We’re all in this together and will come out stronger together.